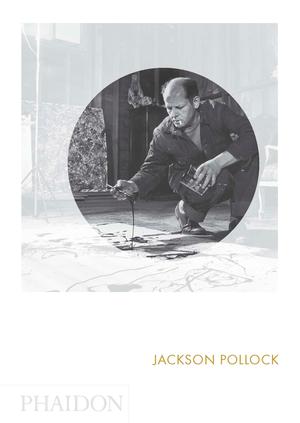 My Jackson Pollock monograph was published in September 2014.
SPECIFICATIONS
ABOUT THE BOOK
Jackson Pollock (1912–1956) led the vanguard of post-World War II American art with his pioneering method of painting, which broke with tradition in both subject matter and technique. Engaging viscerally with emotions, thoughts and other intangibles, he used fluid pigment poured directly onto the canvas. His liquid medium, applied with sweeping gestures, proved to be the ideal vehicle for the  mercurial content that he sought to communicate: “energy and motion made visible – memories arrested in space.” Charting the course of his life and career, from his early training in figurative painting to his position as the most critically acclaimed proponent of Abstract Expressionism, this book sets Pollock’s artistic development in the context of his volatile personal life and his wide-ranging artistic influences, including Mexican murals and Native American art, as well as European modernism. Pollock’s extraordinary impact became evident when his patron Peggy Guggenheim declared him to be “the greatest painter since Picasso.”

As the director of the Pollock-Krasner House and Study Center, I have been privileged to work with several of the most prominent Pollock scholars. Foremost among them is Francis V. O’Connor, whose advice and encouragement throughout my career have been invaluable. I have relied heavily on his pioneering chronological and documentary research. I am thankful to him, and to Eugene V. Thaw, his co-editor of the Jackson Pollock catalogue raisonné and the Pollock-Krasner Foundation’s president emeritus, for their comments and suggestions. The foundation’s exemplary stewardship of Pollock and Krasner’s legacy, and the cooperation of its board and staff, including permission to reproduce Pollock’s work, are sincerely appreciated.

Steven Naifeh and the late Gregory White Smith, co-authors of the Pulitzer Prize-winning biography, Jackson Pollock: An American Saga, kindly let me read their wealth of interview transcripts in the early stages of my research, and granted me permission to quote from unpublished material. I also wish to thank Lillian Meyer Emanuel, Joan Mendenhall Schreder and Howard Zucker, M.D. for contributing previously unknown information about Pollock, and the estates of Rebecca Tarwater Hicks and Tony Smith for allowing the publication of recently discovered works by Pollock.

I am grateful to Kim Scott, the project editor at Phaidon Press, for her expert guidance in shaping this book. It was David Anfam, Phaidon’s commissioning editor and a respected scholar of Abstract Expressionism, who recommended that I write it and contributed significantly to its development. I appreciate his confidence in me, and trust that my efforts live up to his high standards.

This book is lovingly dedicated to my husband, Roy Nicholson, whose help in ways large and small was essential.

SOURCES CITED IN THE TEXT

An extensive Jackson Pollock bibliography is available at http://research.moma.org/jpbib/

‘ENERGY AND MOTION MADE VISIBLE’

the greatest painter since Picasso Peggy Guggenheim, Out of This Century: Confessions of an Art Addict (London: André Deutsch Ltd., 1980), p. 315.

Sculptoring I think tho is my medium Jackson Pollock to LeRoy Pollock, February 1932.

In 1933 he watched Rivera Written statement by Lillian Meyer Emanuel, undated (Spring 2001), Pollock-Krasner Study Center archives, courtesy of her daughter Madeleine Maxwell. “Jackson and I would walk hand in hand all over Greenwich Village,” she recalled, “silently looking at buildings and birds flying up above. Sometimes he would take me to exhibits. I remember seeing Diego Riviera [sic] and Marc [sic] Rothko’s work.” (Rivera painted the New Workers School portable frescoes from July – December 1933. See Bertram D. Wolfe, Portrait of America by Diego Rivera [New York: Covici, Friede, Inc., 1934], p. 31.) Pollock painted a watercolor portrait of her, which she gave away. Their relationship failed due in part to his drinking. “I remember him well,” she wrote, “with a cigarette dangling from his lower lip. He was a western man and I was an easterner from Brooklyn. He did attract and fascinate me.”

frescoed a wall of the clay room Transcribed audiotaped interview with Nathaniel Kaz (aka Katz), Saga archives, Book 16:731/6. Although remnants of the frescos are still extant, it is not known which portions may be by Pollock.

painting and sculpturing is life it self Jackson Pollock to Stella Pollock, May 1932.

legendary self-sacrifice See the entry on Collective Suicide at http://www.moma.org/collection/object.php?object_id=79146

they have to eat Francis V. O’Connor, Federal Support for the Visual Arts: The New Deal and Now (Greenwich, CT: New York Graphic Society, 1968), p. 17. The project began in August 1935 and after several reorganizations was terminated in January 1943.

Rebecca Tarwater Their relationship is described in Naifeh and Smith, Saga,pp. 303-306.

I simply paint the life www.moma.org/collection/object.php?object_id=80681(Orozco).

You have an interest Transcribed interview with Reuben Kadish, Saga archives, Book 15:681/3.

I have always been impressed… memories and enthusiasms Questionnaire, Arts & Architecture.

exciting as all hell Jackson Pollock to Charles Pollock, 29 July 1943.

going in too many directions… by an American Greenberg, The Nation, ibid.

improvisational scanning William S. Rubin, “Pollock as Jungian Illustrator: The Limits of Psychological Criticism,” Art in America, Vol. 67 (1979), reprinted in Pepe Karmel, ed., Jackson Pollock: Interviews, Articles, and Reviews (New York: The Museum of Modern Art, 1999), pp. 248-249. Rubin convincingly refutes interpretations of the painting that identify two figures, the female on the left facing a male standing on the right. He points out that “Stenographic Figure contains but one protagonist (female and animalistic),” and argues against “forced readings” of Pollock’s numerological symbolism.

noughts-and-crosses grid This is the British term for tic-tac-toe. Phaidon Press, a London-based publisher, has also changed various words (e.g. color, fiberboard, favorite, program) to British spellings, except in the title of Harbor and Lighthouse.

I want to express my feelings Wright interview.

the resistance of a hard surface Jackson Pollock, “My painting,” problems of contemporary art:possibilities 1 (Winter 1947/8), p. 79.

The floor is right for me Helen A. Harrison, ed., Such Desperate Joy: Imagining Jackson Pollock (New York: Thunder’s Mouth Press, 2000), p. 92. Quotes from this source are from Jeffrey Potter’s notes of conversations with Pollock.

The thing that interests me… arriving at a statement Wright interview.

an advanced stage Sam Hunter, “Among the New Shows,” The New York Times, 30 January 1949, Sec. 2, p. 9. Like Parker Tyler, who wrote in “Nature and Madness among the Younger Painters” (View V, May 1945)that “Pollock does not seem to be especially talented, there being too much of an air of baked-macaroni about some of his patterns,” Hunter would later reverse himself on the merits of Pollock’s work. Tyler’s “Jackson Pollock: The Infinite Labyrinth” (Magazine of Art, March 1950), describes the poured paintings as “beautiful and subtle patterns of pure form,” while Hunter’s 1956 catalogue essay for the Museum of Modern Art’s memorial exhibition concludes that they “testify to a fresh birth in the realm of contemporary art” and display “a deep and moving lyricism.” Sam Hunter, “Jackson Pollock,” The Museum of Art Bulletin, vol. XXIV, no. 2 (1956-57).

Two of Holmes’s pictures [George Hunt], “Jackson Pollock: Is he the greatest living painter in the United States?” Life (8 August 1949), pp. 42, 45. Although Dorothy Seiberling is usually credited with having written this article, she was in fact a staff researcher who contributed background material, including the interview with Pollock, to Hunt’s article. Seiberling later became Life magazine’s art editor.

I’ve had a period of drawing Jackson Pollock to Alfonso Ossorio, 7 June 1951.

life and work are one Harrison, Such Desperate Joy, p. 92.

If Pollock were a Frenchman Clement Greenberg, “Art Chronicle: Feeling Is All,” Partisan Review 19:1 (January–February 1952), p. 97.

With me it’s only my chemistry Harrison, Such Desperate Joy, p. 90.

“caressed” the canvas Interview, “Jackson Pollock: Portrait,” Strokes of Genius. The video mistakenly illustrates Lavender Mist, which also features Pollock’s hand prints but was painted two years after Mercedes Matter observed him at work. In conversation during the 1990s, she confirmed that the painting to which she referred is Number 1A, 1948.

diagnosed with an enlarged liver Interview (19 September 2006) by the author with Howard Zucker, M.D., who conducted Pollock’s physical examination during treatment for alcoholism in early 1951. Under the care of Ruth Fox, a psychiatrist who specialized in treating alcoholics (see Naifeh and Smith, Saga, pp. 660-661), Pollock was briefly admitted to a private clinic in New York City. Dr. Zucker, who was training under Dr. Fox, questioned Pollock about his medical history and discussed his successful treatment by Edwin Heller, M.D., an East Hampton general practitioner, who had kept Pollock sober for two years, from late 1948 until late 1950, with a combination of straight talk and tranquilizers. In addition to diagnosing Pollock’s cirrhotic liver, Dr. Zucker noted hardened lumps below both of his kneecaps. When he asked Pollock about them, the artist answered, “I paint on my knees.”