An Artist for our Victory

When President Bush finally declares victory in Iraq, which artist will be called on to commemorate America’s military triumph?  A recent NPR story about the Bayeux Tapestry got me thinking about art that celebrates war, which is in fact much more common than anti-war art.  It’s found in all cultures, and there’s so much of it because the victors commission it and put it in prominent places.

The Bayeux Tapestry, which now has its own museum in France, is a chronicle of the Battle of Hastings in 1066.  The winner was William of Normandy, who went on to conquer all of Britain.  It’s really not a tapestry at all, but an embroidered strip of fabric, 230 feet long, that was probably created at the behest of William’s half brother soon after the victory.

A couple of hundred years earlier, in central Mexico, the Eagle Clan was beaten by the Jaguar Clan, who hired fresco painters to commemorate the slaughter of the defeated warriors, life size and in gory detail, on the walls of the great pyramid at Cacaxtla, facing out so everyone could see it.  Here are vivid pictures of what you can expect if you dare to challenge the winners’ authority.  Go back another 2000 years to ancient Egypt, and you’ll find plenty of temple friezes, like the magnificent ones in Luxor, celebrating the Pharaoh’s triumphs in battle, whether or not he was actually there in person.

In the 18th century, when the Chinese emperor built himself a summer palace in Beijing, he had the building’s long corridor lined with big paintings of famous historical battles that show the rulers defeating the would-be usurpers.  And when the fledgling United States erected a capitol building in the early 19th century, the government hired the painter John Trumbull to depict the surrender of Lord Cornwallis’s army at Yorktown, which ended the American revolution.  This time the usurpers won, and they weren’t slow to realize the propaganda value of reminding everyone who passed through the rotunda that they owed their liberty to the brave officers and stalwart troops whom Trumbull tactfully cleaned up for the ceremony–where, incidentally, Cornwallis was a no-show.

So who will be our Trumbull for the twenty-first century?  We don’t have anyone with experience, since we’ve been a bit short on military victories for the past sixty years.  Felix de Weldon’s sculpture of Marines raising an American flag on Mount Suribachi, on February 23rd, 1945, marks the last time we could honor our warriors unequivocally.  So when we finally declare ourselves the winners in Iraq, who can we turn to for an appropriate memorial? 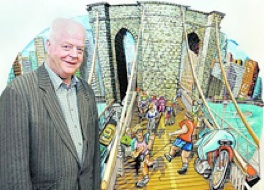 I nominate Red Grooms [left], whose current exhibition at the Nassau County Museum of Art in Roslyn Harbor shows that he has all the right credentials.  He could give us a great battle scene, full of action and incident, packed with colorful characters, and above all tinged with ironic wit.  His sense of theatrical absurdity is just what we need to commemorate our current misadventure.