After the mural or sculpture is unveiled, after the dignitaries make their speeches, after the donors are thanked and the ribbons are cut, who is responsible for taking care of the works of art that grace our public spaces? All too often, little thought is given to maintenance. Like the buildings and civic spaces they occupy, the artworks can deteriorate if they aren’t properly cared for. But they need a special kind of care, which their stewards, all too often, are not equipped to provide.

The point was brought home in a recent article in the New York Times Long Island section, which reported on condition problems with the murals in the auditorium of the Setauket Elementary School. Here is a case of well-meaning intervention gone wrong. After being removed, cleaned and restored, at a cost of $50,000, the murals were returned to the auditorium, which had been renovated and enlarged. But the improvements to the building were not good for the murals. Improper installation and unsuitable environmental conditions now threaten their long-term survival, and the cash-strapped school is not about to spend the money to create museum-quality climate control. Given its educational priorities, and a budget that doesn’t include a line for art conservation, how can the school be expected to deal with this problem?

This question is by no means unique to Setauket Elementary. In the 1930s, hundreds of public buildings around the country, from court houses and post offices to schools, libraries, hospitals, housing projects–even prisons and sewage treatment plants–acquired artwork commissioned by the various art programs of the New Deal. Technically, these pieces are still owned by the federal government, which financed their creation, but just try to get Uncle Sam to pay for their upkeep. Under the current administration, pious as they are, you haven’t got a prayer. 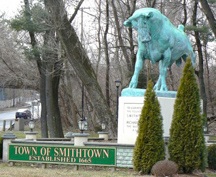 Even privately financed public art, like the imposing monument commemorating the founding of Smithtown, Long Island [right], is often the victim of benign neglect. Charles Rumney’s 14-foot bronze statue of “Whisper,” the bull that legend says was ridden by Richard Smith to establish his claim to the land that is now Smithtown, was commissioned by a Smith descendent in 1923, although the town didn’t have the will or the money to install it until 1941.

This is a true Long Island landmark, in my opinion the finest public sculpture in the region, but any casual observer can see that it’s badly in need of restoration. Decades of exposure to the weather, air pollution, and the lack of routine maintenance have left its surface pitted and stained. It probably suffers from bronze disease, which will eventually erode it beyond repair. Annual waxing could have prevented this destructive process, but what did Smithtown know about sculpture preservation?

When you buy a house, you know that sooner or later it’ll need a paint job and a new roof. You know that your car needs an oil change every so many miles, and that if you don’t have your teeth cleaned regularly they’ll fall out. In the public sphere, our parks, beaches and other amenities need constant care to keep them in good condition. So why would you assume that art needs no maintenance?

I’d like to suggest that whenever a public artwork is commissioned, the deal includes an endowment for its upkeep. It wouldn’t take much money to ensure the survival of our monuments–all it takes, in fact, is the realization that they can’t survive on their own.