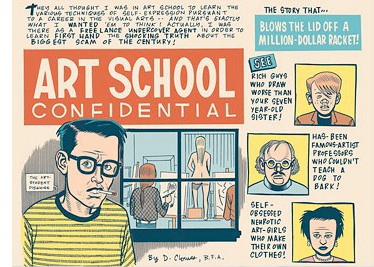 If you’re planning to see this movie, don’t listen to this review. One, because I’m going to give away the ending, and Two, because I may change your mind. On the other hand, you really should see it if you don’t know all the clichés about art-world wannabes, coulda-beens and has-beens. This film is a primer of stereotypes–not one fully developed character makes an appearance in the whole 102 minutes.

Our hero, Jerome, is a wimpy kid from the suburbs who gets bullied because he’s artistic. This poor loser doesn’t know how to capitalize on his only asset. What he does know is that artists get a lot of sex, so he wants to be one. Can you see where we’re going here? I thought you could.

The story isn’t very long, but it benefits from abbreviation. Jerome goes to an art school called Strathmore Institute and falls in love with the life class model, whose father happens to be a famous artist. She becomes his entrée into the professional art world, which as you might expect is populated by pompous, arrogant, venal manipulators. That also describes Jerome’s fellow  students–all except one, who turns out to be an undercover cop.

What the heck is he doing at Strathmore? He’s investigating a series of stranglings on the Strathmore campus, an improbable ivied enclave modeled on Brooklyn’s Pratt Institute but transplanted to SoHo. If this feels phony, that’s because it is–the film was shot in and around Los Angeles, and looks like something cobbled together on the back lot.  In class, the students trot out every known theoretical platitude, defensive put-down and jealous innuendo, while their professor–played with his trademark predatory cynicism by John Malkovich–struggles to salvage the wreckage of his own failed artistic ambitions.

The tedium is briefly relieved by Jerome’s visit to an even more pathetic failure, a former Strathmore student who is such a disgustingly abject role model that you wonder why Jerome doesn’t immediately drop out and join the Army. By a marvelous coincidence, this fellow just happens to be the strangler, and of course he paints pictures of his victims. Jerome steals the paintings and passes them off as his own, thereby becoming the chief suspect in the murders. And wouldn’t you know it, his subsequent notoriety makes him a hot property in the art market. Go directly to jail, and you get a waiting list of buyers. Well I’ll be darned–so that’s how you do it.

I think “Art School Confidential” is supposed to be a satire, but the screen writer, Daniel Cowles, is no Voltaire. The humor, what there is of it, is as broad and forced as vaudeville, and just as dated. Max Minghella does a workmanlike job of depicting Jerome as an ambitious but essentially spineless nebbish who never does get the sex he craves. Nor can he paint like the artist whose work he stole. So what will happen to him when he has to produce his own paintings? Well, as Andy Warhol might say, his fifteen minutes will be up.